This weekend was also quite cake-crazy. We've got a few more lined up for the summer, but I feel like I can breathe a bit more now! And draw again!!!


This cake was extra stuff from all our recent orders!
Hubby and I gave it to our helpful Physical Therapists
(at First Physical Therapy- their logo is a wave)
who are fixing our hurting shoulders and backs.
This cake is for our nephew who is turning five years old.
He requested a chocolate cake with pirate TOYS on it, haha!
So I made an island for them to search for buried treasure.
I actually put a red "X" next to the dude with the shovel, but forgot to take the photo of it! 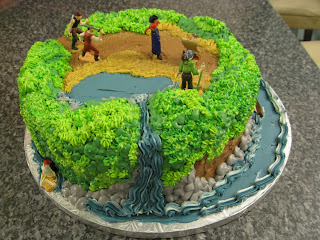 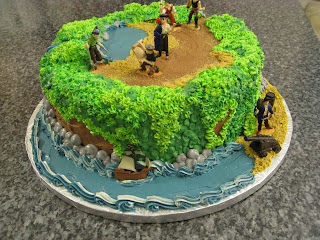 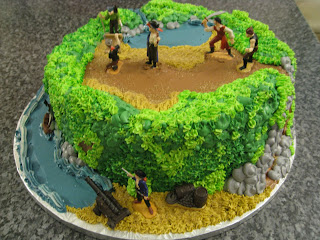 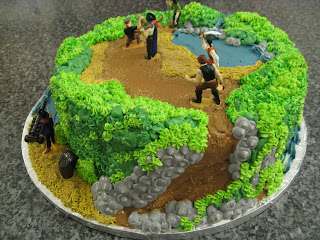 These two sheet cakes are meant to be one cake.
We did it this way because no one owns a refrigerator
big enough to hold the full sized sheet cake!
The left side is vanilla and the right side is chocolate!

And I've got another Potential Client! We are working on sketches for the characters in his self-published book. I'll keep you updated! :D
Posted by Melanie Linden Chan at 1:23 PM No comments:

This weekend Hubby and I had quite a few cake orders to fill. We usually only need to make one cake, once a month or less. This weekend we had five, (*Correction: Technically, we created Seven cakes, because the tiny baby graduation cake counts as a cake, and the wedding cake was made of two cakes... Hubby insisted that it was seven) and thankfully only three (or now, five) of them needed to be decorated. The other two are what we call "cake fodder," because it was just a slice-and-eat sort of deal, no decorations. 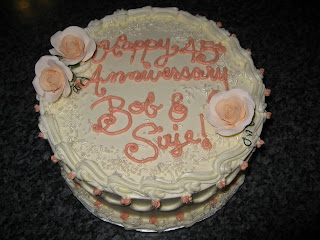 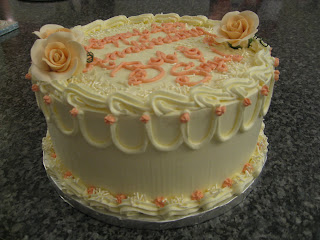 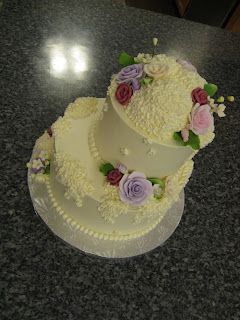 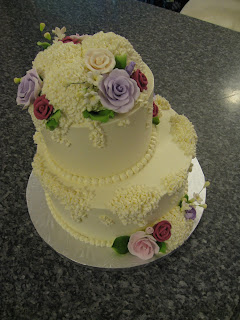 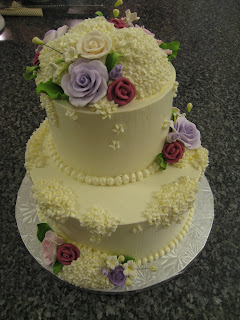 And a Batman Graduation Cake... 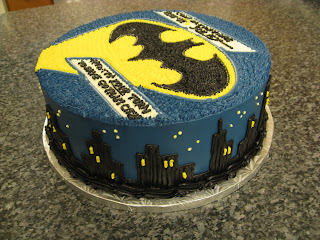 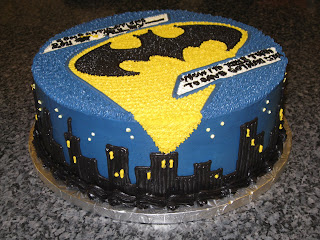 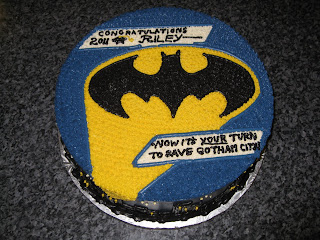 ...and Batman's sidekick, the strawberry-free version.
(This one is just a baby, so I really didn't count it as a real cake.) 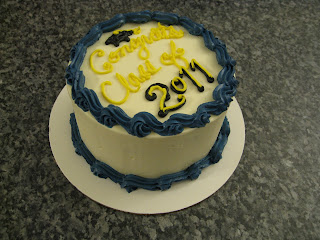 Phew! Looking at those makes me tired all over again! But we have more orders over the next few weeks so I'd better not put those piping tips away just yet!

This latest project is not entirely of my own creation, however my cousin who is getting married this June LOVES everything and anything Hello Kitty, (her wedding is HK themed!) and since this painting was for her I thought it would make her happy. She also recently got a new home and loves to bake.

I painted all three of these on canvas with acrylic paints and layered in caran d'ache scribbles with matte medium. The silver words in the background are Sharpie, covered in matte medium. It was a fun little project! 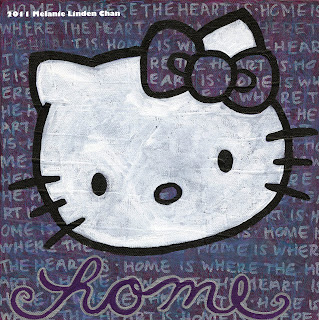 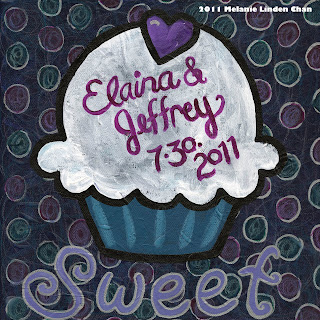 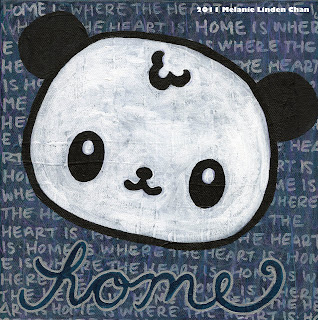 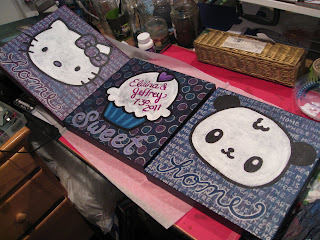 I think they're pretty nifty! They'll match the stainless steel in the kitchen, anyway. ;)
Posted by Melanie Linden Chan at 9:48 PM No comments:

Even though this piece was not originally for Illustration Friday, it fits in just fine! Really, it has always been intended as a gift for my cousin and her boyfriend to celebrate their new home!

I have also just realized I forgot to draw something... there is a mistake! Aha! Let's see if anyone else can point out what I forgot, hee hee! It is far too late to be fixed, so I'm not going to fret over it. That's what I get for doing a rush job! :)
Posted by Melanie Linden Chan at 1:20 PM 2 comments:

Let There Be Light, and #YAsaves

There has been a big hullabaloo going on in Twitter World these past few days. And in the newspapers. And on Facebook. And on the blogs.
It’s called #YAsaves.
I really hadn’t planned on putting my two cents worth in. I want to keep this short because I’ve got painting and cleaning and stuff to do.  I was just minding my own business on my morning off, catching up on the news from the weekend, sitting in my pj’s and waiting for muffins to come out of the oven. But as I was reading, this little #YAsaves thingie kept popping up. So I just kept on reading. And getting agitated.
You probably know where this is going, but there are plenty of people that don’t “live in the book world” and read articles like us Kidlitters do. It essentially started with this Wall Street Journal article, which stated that YA books are too dark, it gives teens bad ideas, etc, etc. The author of the article claims that real world isn’t dark like that.
And you can imagine lot’s of people had plenty to say. And it went like this:
A Response to the Original Article
How Twitter got involved, and everyone's response to this... http://twapperkeeper.com/hashtag/YASaves
An Author Speaks Out


The real world isn’t dark. Mmmmkayyyy.
This is the part that irks me most, because I see Darkness each and every day. I’m a waitress in a small town family-run restaurant. I have been working alongside teens since I was a teen. I’m only 29, and since then I have endured/witnessed/been-told-about the following REAL WORLD darkness, concerning REAL WORLD people I know, whom I have kept their secrets and will not reveal their true identities:
Keep in mind I can actually picture these people’s faces. They are in my memory, on my mind, and ache in my heart. They are REAL people.
That being said, books aren’t the bad stuff, it’s our society and world that has become tainted. This is a topic that has comes up in nearly every conversation I have these days. “What is the world coming to?” It has become such a dark place. People get hurt, because their aggressor’s had been hurt and had no outlet, so they lash out. They bully. They hate.
Those who cannot find relief from their pain or confusion will end up lashing out. They will create more pain because they cannot find a way out. If we are lucky, they will somehow find a bit of Light from their Darkness… there are plenty of “lucky” people out there who could have easily chosen the wrong path due to their dark past, but somehow managed on their own to break free. I know some of them.
Maybe that Light happened to be a book. It could have been a picture book about divorce, read over and over until even now, as a 29 year old. It could have been a YA book about cutting, or vampires, or just a wizard with a lightning scar. It could have been a Bible.
I often “joke,” with my bar customers as we watch the news, (but I’m actually being serious) that the Badguy probably wasn’t read to as a child.
He probably wasn’t read to as a child, because reading is communication. Being read to is communication. Talking about books and hypothetical situations is communication. Telling someone that you have been hurt and you need help and you don’t know how to cope is communication. Listening is communication. Loving is communication. Hurting is bad communication.
Lack of communication between couples = divorce. Lack of communicating rules, peace, love, pride of, and respect to your children = children lashing out for attention, bullies, hate. Lack of communicating your pain, and receiving some sort of connection or way to cope = just another Law & Order episode.
Let the kids read. Let them learn. Let them cope. Let them figure out for themselves what is good or bad, instead of basing it on the only thing they know: their own dark worlds.
Books give light.

ps. more links, and I'll keep adding as I find them:
this-wsj-thing, and being a normal kid reading these books
stuck-between-rage-and-compassion, and talking with your kids about what they read
How I Learned to Embrace the Darkness
my-take-on-wall-street-journal-article, with some facts on the bad stuff
making-the-darkness-visible
Not All YA is Doom and Gloom
Posted by Melanie Linden Chan at 1:39 PM 1 comment:

Here it is, fully painted and colored all nicey-nice like: